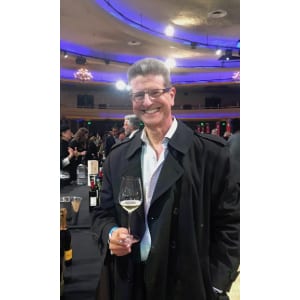 This year’s KFWE-LA was held at the Hollywood Palladium on Wednesday, February 13. It’s been quite rainy in LA of late, so the change in venue was prescient, as the last several events had been held on the rooftop terrace of the Peterson Automotive Museum on the corner of Wilshire Blvd and Fairfax Ave. We arrived a little early, having pre-paid our parking on a new (well, new to us) app called Spot Hero. The Palladium is an iconic Hollywood venue, built back in 1940 and refurbished a little over 10 years ago. It’s main hall is spacious, almost cavernous. The setup felt a little sparse, as did the attendance at the trade portion of the event. Some wineries that we were looking forward to seeing were not there (Tzafona, Koenig) and others were there in full force with multiple product displays (Jezreel, Psagot, Vitkin and others.) Tried and true wineries that we love (Tabor, Tulip) were there with their wonderful offerings. We had opportunity to meet new friends and see many old friends in the wine biz.

Of interest this year were the wines from boutique producer Or HaGanuz. This winery, located in Israel’s Galilee region alongside Mt. Merom (skiing, anyone?) has some well-scored and impressive wines, including a Cabernet Sauvignon/Cabernet Franc blend called “Elima” which has no added sulfites as well as highly scored (91 points WA/WE) single vineyard Cabernet Sauvignon called “Namura.” We’ve brought both of these wines in this year in anticipation of Passover, our busiest season by far. We’ll have more to share about these wines specifically via our newsletter shortly.