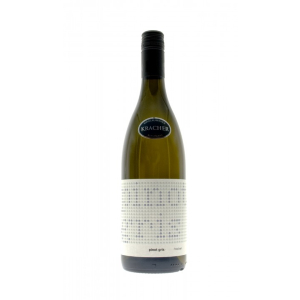 It’s no secret that the Kracher wines are some of the most widely respected in the world among sommeliers, collectors, and wine writers.

Weinlaubenhof Kracher is in Burgenland, an hour southeast of Vienna and near the Lake Neusiedl. Driving through his vineyards, which are within the National Park Neusiedler See-Seewinkel, just three kilometers from the shore, the main attraction in the area is the lake itself. It’s nearly 22 miles long, and very shallow, less than six feet deep at its deepest point. The influence of the lake and the Pannonian climate (low precipitation, hot summers and moderately cold winters) create a very special micro-climate, with fog occurring regularly in the fall

Today, Kracher owns 35 hectares total spread over 89 plots. In the vineyards, Kracher follows sustainable farming and has never used herbicides. The vineyards are planted at a high density to lower yields, which gives the wines more concentration and complexity.

Kracher built a new winery in 2014 that is run entirely on solar power. At harvest, the grapes are strictly sorted according to ripeness and each plot is vinified in it’s own tank. Fermentations are long and slow with natural yeasts in stainless steel or large oak barrels depending on the cuvée. Before bottling, each vintage blend is determined by blind tasting. The goal is to capture the balance of acidity, luscious fruit,  and the complexity of this very special micro-climate.

Alois Kracher’s passion for his vines was irrepressible, learned from his father and passed on with fervor to his son Gerhard. Unsuspecting guests of their winery are often hijacked to the vineyards for vine by vine tours, during which they animatedly point out subtle graduations in the terrain which make all the difference between Kracher vineyards and those of his neighbors. Small, undulating crests in the topography give a great advantage to the vines in this sandy, often water-soaked terrain. The vitality of Kracher’s vines is obvious; the leaves are richly colored and the stalks thick and strong, resulting in fruit offering complex layers of flavor. Alois Kracher, in his tragically brief lifetime, achieved recognition as one of the greatest dessert wine makers in the world, and his son Gerhard continues to hold high the standard of the winery.

In describing the 2017 Pinot Gris, Wine Enthusiast Magazine states: “A subdued pear juiciness mingles with subtle wood smoke on the nose. The palate is juicier and fruitier than those aromas suggest, but it also has a lovely tiptoe lightness and lemony brightness. This is subtle, light and elegant with a wonderfully juicy finish.” 91 Points.