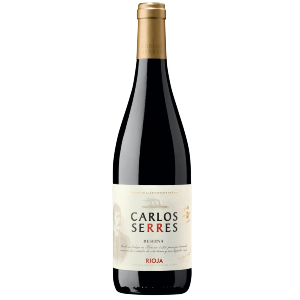 Carlos Serres the man came from Bordeaux in the late 19th century, after phylloxera had devastated the wine industry in the Médoc. Carlos Serres was a pioneer in Rioja. In 1896 he established one of the first wineries in Haro, the wine capital of Rioja. He was an instrumental figure in promoting the early exports of Rioja wines. Finding the perfect terroir to make Bordeaux-style wines, he settled in Haro and set up shop—not just as a winery, but as one of the region’s first exporters. In 1907, he established the Rioja Wine Exporters Syndicate, a forerunner to the modern Rioja Designation of Origin Control Board, and by the early 20th century, his wines could be found in France, England, Cuba, and the US.

All the Tempranillo (90%) and Graciano (10%) for this wine come from a selection of the different parcels of the Finca El Estanque vineyard, a 60-hectare vineyard owned by the winery in the best areas of Haro. The vines are 30 years old on average.

Fermented in concrete vats. After destemming and gentle pressing, the juice macerates on the skins before fermenting for approximately 13 days at a maximum temperature of 30 ºC. Ageing: 24 months in a combination of American and French oak barrels, then a minimum of 12 months ageing in bottle.

In scoring this wine a 90 Points, Robert Parker’s Wine Advocate said, “The classical, sleek and polished 2014 Reserva was produced with a blend of Tempranillo with 10% Graciano from their El Estanque estate vineyards. The grapes fermented separately and matured in French and American oak barrels for 18 months. The nose has it all—the ripe berries, the forest floor, the sweet spices, the balsamic incense and cigar ash—all in harmony and integration. The palate is medium-bodied with resolved tannins and good balance, lively and tasty, almost salty. Great price too. 118,000 bottles produced. It was bottled in 2018.”